A moving story of how a legendary football team was lost to tragedy – and how this disaster irrevocably altered the lives of the survivors and the bereaved families, and ultimately brought shame on the biggest football club in the world.

The Manchester United team Matt Busby had built in the fifties from the club's successful youth policy seemed destined to dominate football for many years. Such was the power of the ‘Busby Babes’ that they seemed invincible. The average age of the side which won the Championship in 1955-56 was just 22, the youngest ever to achieve such a feat. A year later, when they were Champions again, nothing, it seemed, would prevent this gifted young team from reigning for the next decade.

But then came 6 February 1958, the day that eight Manchester United players died on a German airfield in the 'Munich Air Disaster' – a date to be forever etched in the annals of sporting tragedy.

Duncan Edwards, Eddie Colman, Tommy Taylor, Roger Byrne…the names were already enshrined in legend before the air crash, but Munich in many ways earned them immortality. They have never grown old.

Jeff Connor traces the rise of the greatest Manchester United side of all time, alongside a vibrant portrait of England in the 1950s, but he also paints a dark picture of a club that enriched itself on the myth of Munich while neglecting the families of the dead and the surviving players. The repercussions and the toll the disaster took on so many linger to the present day.

Drawing on extensive interviews with the Munich victims and players of that era, The Lost Babes is the definitive account of British football's golden age, a poignant story of the protracted effects of loss and a remorseless dissection of the how the richest football club in the world turned its back on its own players and their families.

‘A thorough, and thoroughly moving, piece of work’ Daily Telegraph

'Covering a lot of ground, this splendid book provides a fascinating insight into many of those affected by the tragedy’ Winger

'Jeff Connor has written a deeply moving account of what happened…Connor's well-researched account is a powerful, enthralling and poignant addition to the growing literature on British soccer.' BBC History Magazine

‘A fascinating memoir' The Times

Jeff Connor is a sports correspondent for the Mail on Sunday. He is the author of eleven books, including an entertaining account of the Tour De France, ‘Wide-Eyed and Legless’, ‘Up Down and Under’, a diary of the 2001 Lions Rugby Tour to Australia, and ‘Pointless, A Season with Britain's Worst Football Team’. 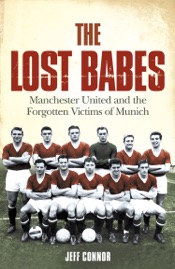